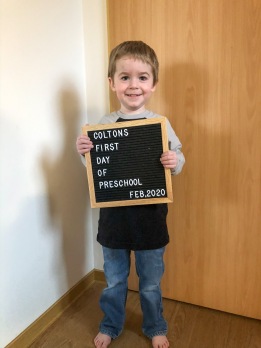 At the beginning of February Colton had his first official day of preschool…6 weeks later he went for the last day of his first quarter. In those short 6 weeks Colton flourished. He grew up so much, was so excited for each school day (seriously- non-school days were a definite struggle for him), and his development really took off.

Let me start with this, we would have tried to put Colton in a preschool program regardless of any issues he may or may not have had. Colton is a very high energy kid and I wanted him to be “exposed” to a classroom setting of some sort before he was thrust into Kindergarten. Colton has had a speech delay, not in a nonverbal sense, but in an understanding words delay. So, after completing the testing, he was enrolled in our “district” preschool program.

So, Colton LOVED preschool. He would come home with the biggest smile, he was learning so much, he made quite a few friends, experienced significant changes in his speech, and, most importantly, he had something that was “just Colton”. It’s been “Colton and Andrew” was so long and as many of us know, we need things that are just for us as well. That was preschool for Colton. He thrived.

When Coronavirus really started to spike and we started to see the changes coming down for places closing, I got a little worried about school. Afterall, Colton was in preschool and, while it was through the district and for a speech delay, I didn’t know how “important” it would be considered in the grand scheme of things. There are children with much larger needs and problems, my kid just needed a little shove/help from someone who wasn’t mom/dad/understood him as he was. 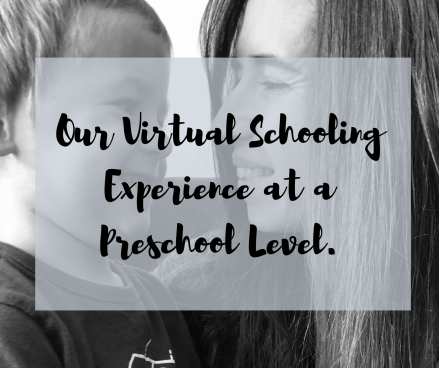 His teachers have been absolutely incredible throughout this entire process. They very quickly emailed all of us parents, letting us know that they were working the problem and trying to figure out what they were going to do to continue working. The “district” did not foresee the preschool continuing on when they made the google classroom plan, so the teachers quickly workshopped a different platform that, actually ended up being a much better option for the younger kids.

They created incredible Digital Learning Plans that made it really easy for parents to incorporate into the day to day lives of children and they were very calm and patient throughout the entirety of the 2 ½ months of this digital learning. They recognized that they only saw the students for a limited time a day, that many had older (or younger) siblings at home that needed their own care, that this is a very different time right now. They’ve been great.

And, I’ll be honest, Digital Learning hasn’t been all that bad. Sure, I’ve ranted and raved about it at times when the focus level was low, or Andrew wasn’t letting Colton get things done, or when things got frustrating with technology, BUT on the whole it hasn’t been bad. It also hasn’t been school though either. 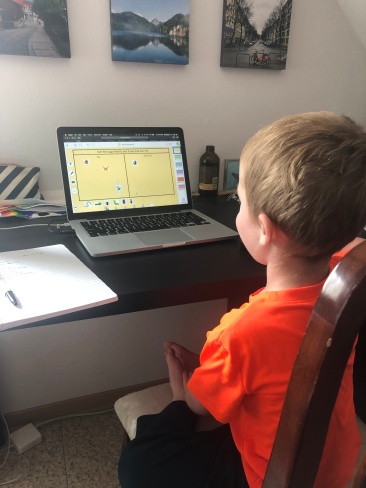 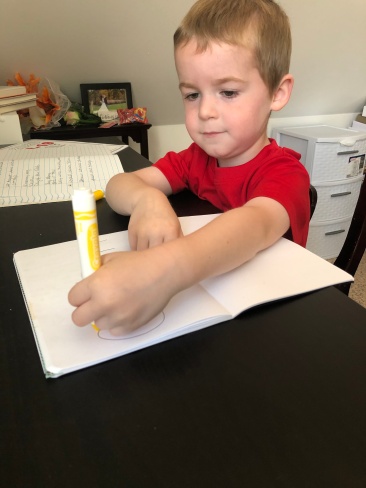 I said it earlier and I’ll say it again, more of my concern with Colton in so far as preschool was concerned was introducing him to a classroom setting, a teacher, a different place that he had to listen, behave, and learn. I wanted to have a little “soft” introduction to the idea of school before Kindergarten hit and he was in it “for real”.

This wasn’t it. Sure, he had weekly video chats with his two teachers (one speech, one preschool), and we had countless activities that his teachers would give feedback with (mostly positive stuff that you would expect), but it wasn’t the classroom. It was mommy’s desk with little brother screaming/playing/running in the background, and daddy working at his desk on the other side of the room. It was chaotic and it became a family affair, rather than the Colton show.

Overall Colton has really excelled in this new wave of schooling. He has adjusted remarkably well and has slid back in terms of speech or education, but he knows it hasn’t been at school. He’s been bummed about not being able to ride his little school bus, see his friends, or play on the playground. Every morning he wakes up asking if today is the day he will go back to school.

And, with about two weeks left in the “school” year (I used quotes as the teaching stopped a week or so before the proper end of the school year), he checked out. He was done. No interest in any of the activities or meetings whatsoever. It became akin to pulling teeth to have him sit down and focus on the work that he needed to do for any longer than 10 minutes. I think he just had enough with the situation, with not being able to do these things in person, and having to share all of that with little brother. (And, in all honesty I was surprised it took him as long as it did to get fed up)

And for me? Well, I have an entirely newfound respect for preschool teachers.

I’ve always respected teachers (hell I want to be one), BUT you forget how much stuff you aren’t born knowing. You forget how much you had to learn and while there are some things that parents can teach (and I have been teaching those things), in Colton’s case, he needed that shove from an outside source.

Anyways, all this to say, Digital Learning has not been a breeze, but we’ve honestly had it easy. I don’t work at the moment, we have access to a computer, to the internet, to the materials that are needed to do the various activities. And we only have one child in preschool. It’s been much harder for many others that I know, talk to, and follow. Nor has it necessarily been a positive experience for our kids. Here’s to hoping we have a few workable solutions for the 2020-2021 school year.