***As a note before we begin, some of these photo’s (in particular the cave one’s) were taken with my cellphone, not my nice, good camera. Between the cellphone camera and the dark nature of the cave, the photos did not turn out in the best way that I would normally feature on my blog. My apologies***

This past Sunday we decided to do a very special Sunday Funday trip and take a Steam Train Ride and explore a cave in a region somewhat near us. Our local post has an Outdoor Recreation Office that organizes a variety of trips for the residents assigned to the post. Sometimes it can be a little more cost effective to go through them for the trips they offer and sometimes they will offer up experiences that you hadn’t otherwise planned or thought about doing. A lot of times they are organized for group numbers and can therefore be offered at a lower price point than if you were to book it on your own.

This was not the case with this trip (I think our pricing was just standard pricing as if we had gone to get tickets ourselves), but they organized the whole day from start to finish. It did mean a very early start to our day (alarms set for 5 AM, to make sure we were ready, with a leave time of 7AM), but it was so incredibly worth it. A real dream come true. If you have the option to go through a group travel or through your own Outdoor Recreation office, you should totally do it! We love to travel on our own but doing it in a group was really fun as well.

So, we started our morning off with a beautiful, scenic drive to Frankische Schweiz area to a little train station (you can view the website for the train HERE, but you’ll want to use a google translate as it is only in German). We did end up blowing a tire not far from the station (thankfully it was that close, and we were moving at a slow speed so no real loss of control or anything like that), but it gave us a fun memory to go along with the experience. Our guide from the day was very informative, talking us through not only the day, but cool spots to come back to in the future. 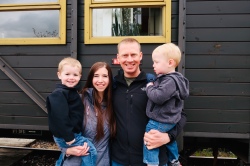 Once at the station we got to take a look at the train itself, watch them bring the steam engine up and connect it all before boarding the train. Our boys LOVED  being able to watch the steam engine pull forward, backwards, and hook up to the train car. It wasn’t too long after we boarded that we were slowly starting to move. The Steam Train itself is from the 1930’s and still runs really well. The full ride was an hour, or two long and we got to lean out the windows, which the boys loved, and get out at the halfway point to watch them move the engine car to the other end. And, of course, they sounded the whistle anytime we were coming through a station or crossing. 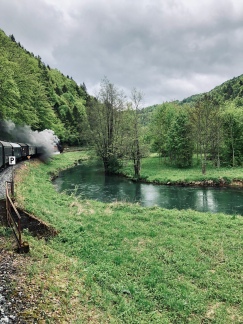 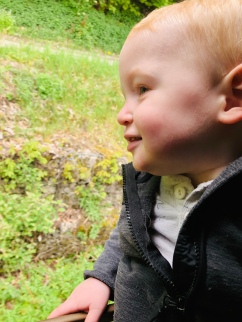 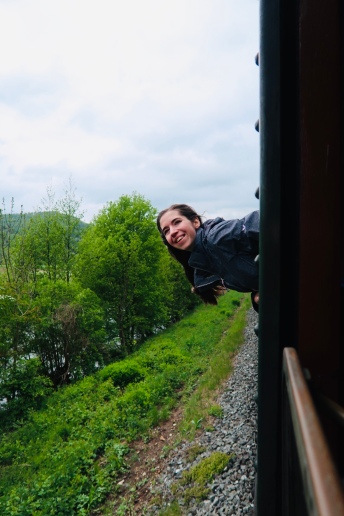 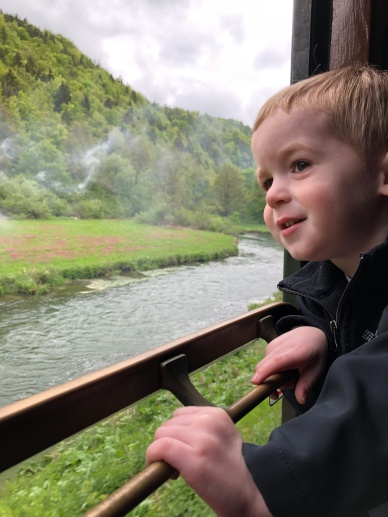 If you get a chance to take a steam train ride, wherever you are, I would highly recommend it. Not only do you get that nostalgic feeling of a time gone by, but it is also just such a slower, prettier, more relaxed way to see the countryside. The steam trains can only go so fast, so you really get a chance to take in the towns and landscapes around you.

We then stopped for lunch at a little restaurant along the Wiesent River where three families with 4 toddlers and 2 infants managed to have a full calm no fuss meal. It’s a miracle! The restaurant was called Bruckla and I had a lovely tomato soup and a sneaky little slice of cake. (No pictures this time though!).

Once we finished lunch we boarded back on to the bus to head over to Teufelshohle Pottentstein (Devil’s Cave). This is a naturally formed limestone cave that features several different formations and can be trekked about a mile through. You climb about 400 steps during the course of the tour. It was discovered in 1922 and was extended/ dug through for the following 10 years. It is the longest cave in Germany (sitting at just under/around one mile) and the largest in Franconian Switzerland. You can read about the Cave/Visit the Site HERE, but again it will be listed in German so Google Translate will be a good option.

There are several “landmarks” of the cave, the first being Devil’s Hole. This is the first hall and features some of the equipment used to dig through after a cave in and some natural formations on the ceiling. Walking past here we can see several natural limestone formations before reaching the next “landmark”, Bears Grotto. This features a complete skeleton of a cave bear. Per the cave the bear was approximately 900 pounds and stood at 12 ft high. There are also some pretty cool formations staggered around the hall. 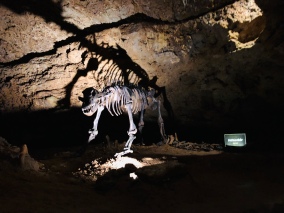 One of the other “landmarks” that we saw within the cave was a large cavern that was covered in stalagmites and stalactites. Called the “Colossal Hall” It is 42 ft high and features the two oldest limestones of Devil’s Cave. These two formations are suspected of being over 300,000 years old. Then finally we saw the Candle Hall and headed through some very (and I mean VERY) tight quarters to find our way to the exit. 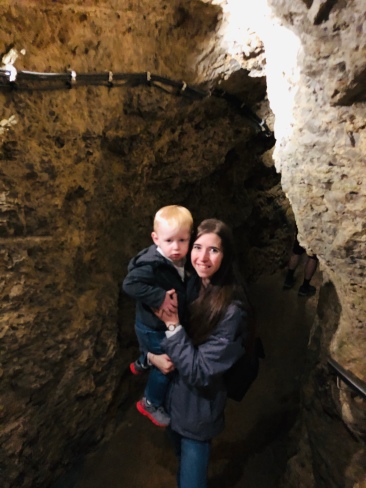 Upon exiting the cave, you come out to this beautiful rock formation and a lite gorge hike to reach the exit of the park. When we walked into the cave we had some light cloud cover, but when we stepped out it was full sunshine and a blue sky. What a wonderful way to come back to ground! 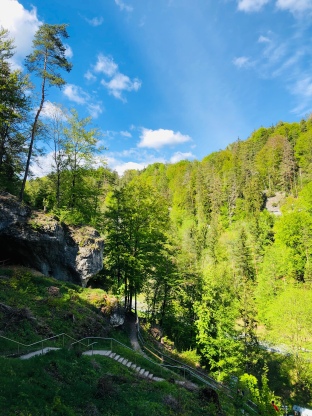 Overall, this was one of our most memorable Sunday Funday’s and a day trip that I am not likely to forget anytime soon. If you have the chance to do a group travel through your own Outdoor Recreation program I highly recommend it. It was a great way to get to know a couple other families (we knew one of the other families) and you get to experience these things together which is always a fun addition.

One thought on “Frankische Schweiz and Pottenstein – A Day Trip”