Ah, our final Christmas Market post. I have one more Christmas related post (all about Krampus!), but this is the last Christmas Market post and I have saved the best for last. Schloss Gutenek was my favorite Christmas Market that we went to this year (followed closely by Dresden) and I cannot wait to share this market with you. It’s one that I think everyone should try to go to (in the area at least). It’s one of those small but perfect markets, that weaves you through various courtyards and castle alleys. To me, it is the quintessential German Christmas Market experience. I think it rivals Thurns & Taxis in Regensburg (read about that one HERE), although I liked this one a bit better and cost wise it was a bit cheaper.

As a castle (yep a little history first…), Schloss Gutenek is first found around the 12th century, although the current set up is dated the 19th century. The property and buildings have bounced around various royal families, finally settling with the Gymnich family.

Schloss Gutenek has only been holding this Weihnachstmarkt for 10 years (so a newbie!) and it is only open during the weekends. It is actually classified as a medieval market and features not only the stalls of a Christmas market, but a tented section that has character actors and artisans making their wares. You can watch the craftsman work away to make the perfect item. There is also both camel and horse rides, as well an old-fashioned crank ride for children. 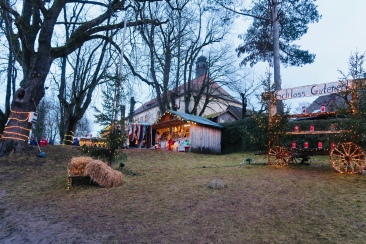 The market itself winds its way through the entire castle grounds, so you not only get to see the market, but also bits of the castle as well. I would say that most of the stalls were hand crafted or unique items, with only a couple (at the most) stalls featuring mass produced items. This particular market also had a couple of enclosed areas where you could sit and drink a beer (from Weltenburger kind of a fun bit to see after visiting the Abbey!) and enjoy your meal of snacks.

The real highlight was standing in the darkened evening with only the lights of the stalls and lamps to see, glühwein in one hand, pastry in another, with a  crackling fire in front, and Christmas Music from a live musician. It was heavenly and I just want to relive that again and again and again.

This was another market that we didn’t actually buy anything at, aside from food and drink, keeping the mug. Again though, we ate some real delights. One of the stalls had a donut selection that was incredible. Donuts here are not quite the same as they are stateside, but they are just as (if not more) delicious. Robert went for a full selection, getting a piece of each kind, while I stuck with staples- chocolate, cinnamon sugar, original, raspberry, and a fried apple chunk. It was absolutely delicious and hit all the right spots. Robert also picked up a pulled pork sandwich which contained pork that was roasted for 2 hours (you could see the spit turning) and featured a select group of spices. He said it was delicious and well worth the price.

It might be a smaller market, and not as exciting as say Dresden would be, but I found this market to be my favorite of the bunch. It was small enough to not be super overwhelming or duplicates, but not too small that you felt it wasn’t worth the time. The ambiance was incredible, and the food was spot on. Everywhere we looked was just Christmas embodied and this was just the perfect reminder that sometimes smaller and more “intimate” can be better. I highly recommend it if you are in the area.