***Disclaimer at the start of this post, there may be content in here that is painful to view . Please be cautioned***

We recently did a very hard, but very important trip to Dachau Concentration Camp. We plan on going to several Concentration Camps during our time here in Germany and originally I had wanted to do one post talking about each of the camps and our overall experiences and feelings. Now, having been to one, I don’t think it is possible to do only one blog post. Not only is there just too much to share (and yet no words to share it, but I’ll get into that), but each camp is different and each camp (I’m assuming here) will bring with it different feelings. How can that be, you may be wondering…Well, not every camp was intended to be a death camp and each camp, while designed the same, holds different information and experiences.

I am going to touch very briefly on the history of the camp itself as I feel like it is important to note, because while many died at Dachau (I think 41,500) it was not originally intended as a death camp. I am focusing on the camp itself, NOT what happened within the camp. There is a much {much} longer history and I you can take a look at the site HERE for a full timeline breakdown.

Dachau was the first camp to exist and was originally created for political prisoners in 1933. Later on, it was used as the model for other concentration camps, and many of the soldiers that lead and worked at other concentration camps received their training in Dachau. It was considered the cream of the crop. In 1935 they started sending larger amounts and different prisoner groups to the concentration camps. In 1937 they re worked the camp and “expanded” to create space for a larger number of prisoners. This is when the number of prisoners start to rise drastically, conditions start to go downhill, and many prisoners start to die. In 1943 they started creating “subsidiary camps” where the prisoners were forced laborers. The camp was liberated in 1945, a little over 12 years after it was opened. In its time it listed 200,000 prisoners total in the main and subsidiary camps.

I quite honestly did not know what to expect. I was raised with the faith and practiced for quite a long time. I consider being Jewish as part of my heritage and as part of who I am (even though I don’t practice). When I was in Middle School/Jr. High School I was obsessed with reading and learning everything I could about the Holocaust. I read a fair amount of books about the Holocaust, still do, watched documentaries and tried to comprehend what happened. My husband is a WW2 fanatic and has seen his fair share of documentaries and together we’ve watched almost all of the WW2 and Holocaust documentaries that are out there. I thought I had a good idea of what to expect.

Let me say this, it is one thing to read about these places, to watch documentaries, to see footage, to listen to survivors’ stories and it is a COMPLETELY different thing to actually be there. To actually walk through a place that held so much terror. So much pain. So much death. There are no words to describe it. Not a single word would do justice the feelings that I, and I’m sure others, experienced walking through the steps of the prisoners. No words.

So, I’m not going to give you words. A picture paints a thousand words and I am going to let the pictures tell the story. I encourage you to look through the pictures (each will have a brief description of what it is), try and imagine yourself walking the steps as you look at the pictures. Take a moment out of your day to just sit with the pictures, to honor the memories of those that walked here, that suffered here, that died here.

Entrance- this is a replica, the original is enclosed within the museum 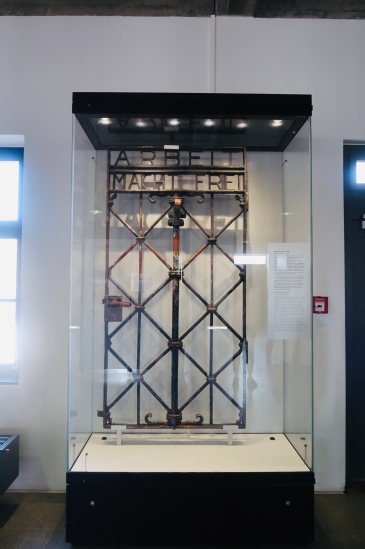 This is the original gate for the entrance to the camp. 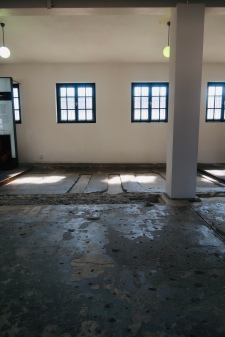 What the Barracks Were Originally

What the Barracks were at the end of the Camp

Each raised platform indicated a Barrack. Each Barrack was numbered. 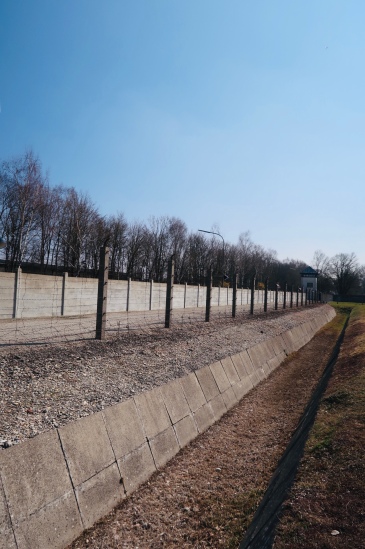 Enclosed Fence area. Each of these had a trench, then a barbwire fence, then a cement fence. Towers lined various points. 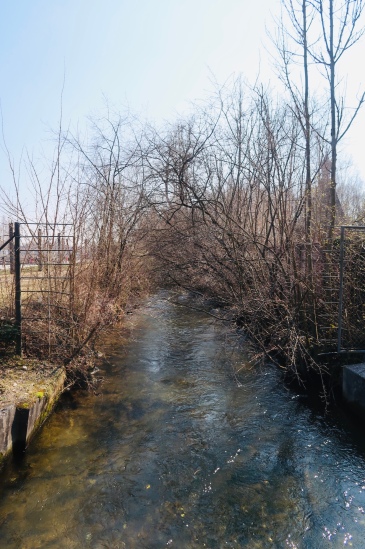 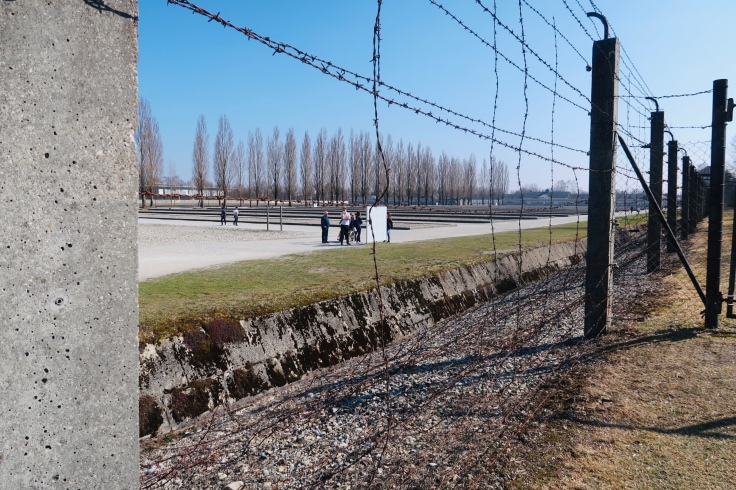 ***WARNING. Some hard images are going to be coming next. The crematorium, gas chamber’s and execution area’s were some of the hardest parts to walk through. Even though Dachau was not intended as a death camp, many still died and executions happened and the gas chambers were used. I debated whether or not to actually post these photos. Standing there was unreal, sobering, heartbreaking, and intense. Even looking back at the pictures elicits the same reactions. This is a cemetery of sorts for so many who died here and in a way it felt wrong, BUT it is too important not to share. You have been warned.***

Outdoors of the Crematorium 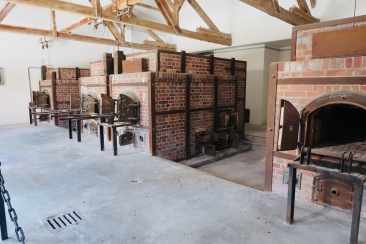 This isn’t the original crematorium, this is the second one as the first became too small for use as the amount of deaths increased.

Entrance to the Chamber

Some final images and remembrances to leave you as we exited the camp. Sculptures that represent the Victims and Survivors, A memorial Plaque, and the full look at the administration building turned museum. 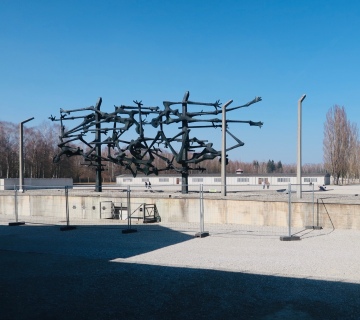