There is an annual event here in Germany, Austria, and Switzerland (basically in the alps) that came from humble origins and has turned into a large festival. There are several throughout a couple week time period, in different locations, all involving cows.

The Almabtrieb is the cattle drive from the alpine pastures to the valley barns. During the summer months the cattle herd will feed on pastures in the alpine regions of Germany, Austria, and Switzerland. When Autumn starts to come around there is one drive for each area of towns to bring the cattle down to the valleys and back to the barns of their farms. Over time, these cattle drives have turned into large festivals, with the cows being “dressed” in wreaths and crowns, and the towns and villages coming out for a grand party. During the festival (which involves a lot of craft booths, drinking, food, and music), the cows are herded right through the center streets for all to see. They typically have large bells to signal their entrance and at the one we went to, they used the fire department bell to signal movement, so there is no chance of missing the cows. 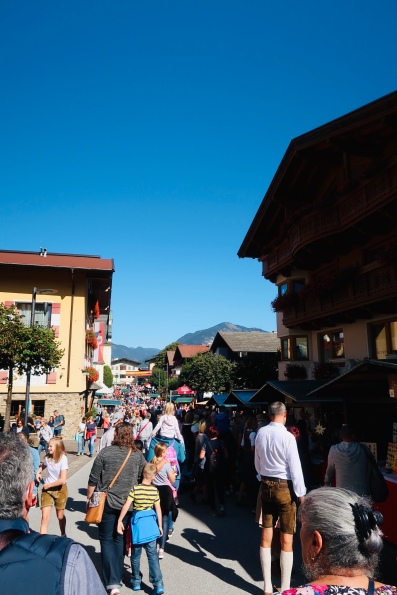 This year we got to experience an Almabtrieb in a little town called Reith Im Alpbachtal in Austria. It’s about a 3-hour drive for us that is really pretty. Austria itself is a gorgeous country, it’s on my favorite spots we’ve been. In terms of the festival itself, there was a lot! It was much bigger than I was expecting with a lot more people. The streets are blocked off (obviously) and lined on each side with booths full of small businesses, food, and drinks. 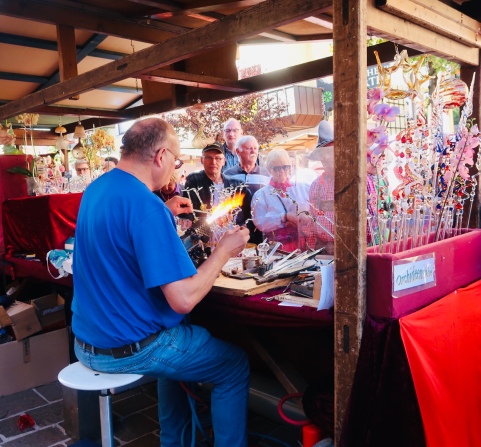 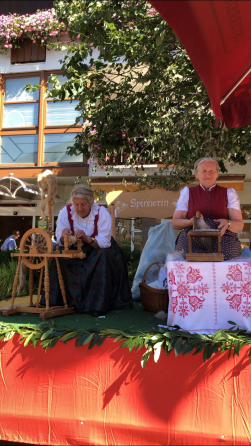 The cows themselves are adorned with crowns and bells at the start of the drive and then paraded through the street. 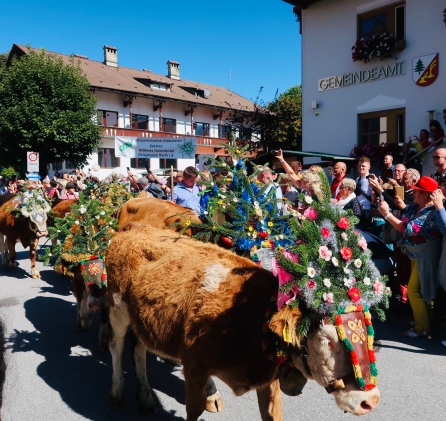 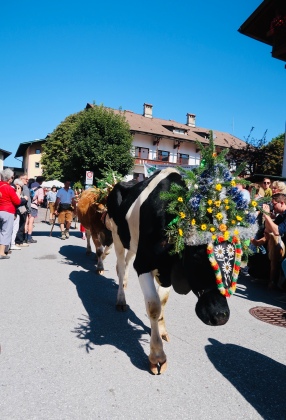 I don’t think that this happens at every Almabtrieb ( I know of one person who has attended one where they didn’t “dress the cow” as they call it), but I think it is at most of them. There isn’t any rope or barrier, so you will actually be right next to the cow as it walks down. The herders walk alongside the cows to make sure nothing happens and to keep the cows moving along. 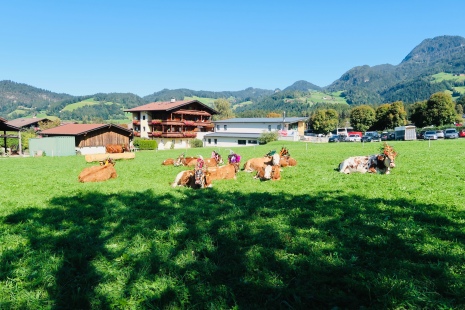 Once the cattle have been through the streets you may be able to go see them in the pasture. I would encourage you to do this as they are able to rest and the bells no longer sound obnoxious in the close confines of the streets, but rather like beautiful wind chimes in the mountains.

This particular festival had several forms of entertainment between these street performers, a whip performance, and different bands that alternated throughout the festival and throughout the day. 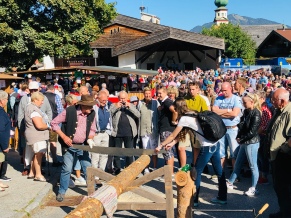 We stopped and bought cowbells, food, and did a little wood project sawing off our own souvenir.

Overall, we had so much fun and I would honestly recommend that anyone and everyone attend. It is such a cool cultural thing to experience and the kids still haven’t stopped talking about it. So, if you’re visiting around this time of year (any time mid-September to early October) make sure to look up the Almabtrieb schedule.