Oh Nuremberg…a romantic (ish) city with quite the history, was there ever any doubt that the Christmas Market would be spectacular? I had heard several of things about this particular market (which we will get into as we go on in this post), the least of which was about just how popular the market is. We decided to visit the Nuremberg Christmas Market as a Girls Night. A train ride in (so no worries on the drinking front), a couple of drinks, a lot of shopping, and an overall good night was had by all. 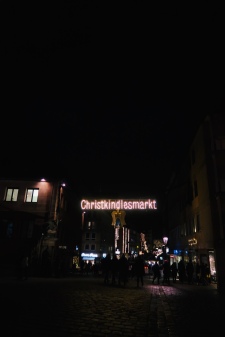 Nuremberg’s Christmas Market is one of the oldest markets in Germany’s history, dating back to the 16thCentury! It also has several traditions, including a post war prologue for the Christkind, the food and drink offered at the market, even the stalls are the old-fashioned striped roof stalls. The market itself is open from 11/29/2019-12/24/2019 from 10AM to 9PM. While we didn’t experience the crowds (we went on a Thursday night that had wacky weather all day), I would recommend getting there right when it opens if you are going with young children or a larger family.

Basically, Nuremberg has one main market with a couple of smaller off shoot markets. The market is in their Old Town Square with Frauenkirche and the Rathaus as a backdrop and The Beautiful Fountain on the outskirts of the market. It’s very compact in this main square as there are around 165 stalls total in the main Christkindlmarkt. You can see how it could become very packed full of people very quickly, but we got incredibly lucky and didn’t have any crowd issues. We were able to take our time walking up and down the stalls and make our purchases.

There are two other immediate market offshoots and those are the Sister Cities Market (with 22 international stalls) and the Children’s Christmas Market. Walking up just a little further will get you to the Original Regional Market, and there is also the Craftsmen’s Courtyard, which is a little closer to the train station area. There is also the Feuerzangenbowle which is the largest punch bowl in the world.

Out of the offshoots, we peaked very briefly at the Children’s Market, which features a nice number of children’s rides and we walked through the Sister Cities Market.

I would highly recommend the Sister Cities Market, not only is it really cool to see and taste different offerings from around the world, it also provided a nice little dose of home with an Atlanta booth (as well as us questioning how the rest of the world sees the States). This little market was a highlight of our time there.

Of course, one of the highlights of any Christmas Markets you attend is the food and drink and Nuremberg was no exception to that. Nuremberg is known for its Nuremberg Sausage and the 3 in a bun or Nuremberger.

This is exactly as it sounds, 3 of the Nuremberg sausages (which are about the size of your finger) in a bun. It is actually incredibly delicious and was a highlight of our evening. We also managed to snag some Apfel Glühwein and Hot Chocolate’s. One of my friend’s got Baileys in her Hot Chocolate and said it was delicious, so that is on my list to try (it was for Nuremberg, but I ended up passing at the last minute). We also got the world famous Lebkuchen, which is a gingerbread style cookie. In my absolute honest opinion of Lebkuchen…I would like it if it didn’t have this weird papery bottom to it. If it was just the standard cookie it would be delicious as it’s quite full of the spices and flavorings.

In terms of shopping, this particular trip was hit or miss despite what my purchases say. It’s one of the disappointments that can come with the larger markets, more mass-produced products, less individual crafted items. In the case of Nuremberg, I would say that each aisle had relatively the same products (displayed differently) with only a handful of local, unique items. I did do a bit of shopping picking up an incense smoker (which ended up having quite the story behind it!), a bookmark, a ring, and a smoker house for my little German Christmas Village. I also did manage to snag two of the Christmas Market Mugs.

I do want to touch on one item that you may want to purchase, an item that is unique to the Nuremberg Christkindlmarkt…the Prune People. These are little “people” made out of prunes and walnuts (I believe). They are only at this particular market and we only saw two or three stalls devoted to them. I’ve included pictures above so you can see what they look like, but did not end up purchasing one.

On the whole we had such a wonderful time at the Nuremberg Christkindlmarkt. It’s definitely a market that you need to get to early to avoid crowds, understand that there will be a lot of heavily commercialized items, and just have very few expectations outside of a good time. I would take the train if you can and avoid trying to find parking, and then walk from the main train station to be able to hit all the markets (which is easily do able in a day trip). At one end of the main market there is a stairway that leads to a restaurant, but also gives you a good vantage point over the top of the square. While it wasn’t my favorite of all the markets we’ve been to so far, it definitely ranks somewhere in the Top 5.