Dresden was one of those somewhat last-minute decisions that was a surprise for me. It’s no secret that my husband isn’t the biggest Christmas Fan (I regularly adoringly refer to him as The Grinch), but he’s been surprising me this year with the Christmas Market fun. He has happily gone to several of them, enjoying and ranking his time at each one, and then by surprising me with a weekend in Dresden. I figured Dresden would be another year, but after our not super great time at Rothenburg ob der Tauber (HERE), I think he felt like we really need to end on a good note.  Oh boy, did we end on a good note…

Where do I even begin? Dresden is the home to 12 (yes 12!) Christmas Markets throughout its city and we went to a total of 6 (we did wander through 1 partially open one as well, but not counting that). I am going to break each market down in sections to make it easier to navigate this post. A couple of things to note before we really break everything down though. Most of the markets this year opened the last weekend of November and closed the 23 of December. The Stallhof is open until New Years. Due to the dates passing, I am not going to put the specific dates and times for each market, just the general dates in the previous sentence. Since Dresden is one of the more popular and well-known markets it will be crowded. Finally, some of the things that Dresden markets are known for (and that are typically sourced directly from a business in the area, rather than mass produced) are Christmas Pyramids, Smoking Figures, Pottery and Glassware, and of course, the Christstollen (the desert that the main market is known for). There are various Parking Lots throughout the city and parking, while a tiny bit difficult to find on the first day, wasn’t overall a huge problem for us. 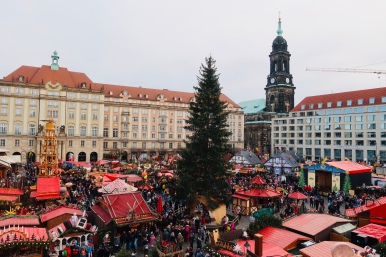 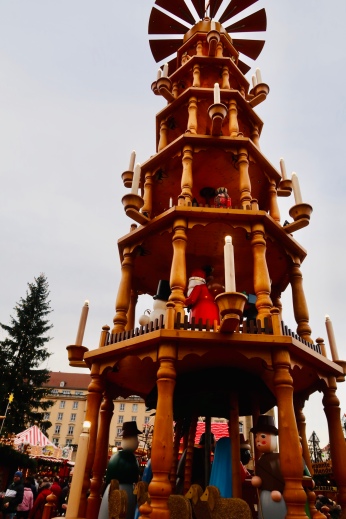 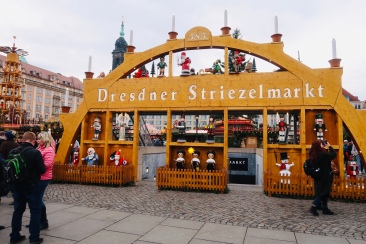 The biggest Christmas Market (and oldest) is The Striezelmarkt. This is the oldest Christmas Market in Germany, dating back to the early 1400’s. The name is unique (normally Christmas Markets are Christkindlmarkt or Weinnachtmarkt) and it comes from the name of the German Christmas Cake, Hefestriezel. This market is in the center of the historical portion of Dresden and overtakes the entire square. The entrance of the market is also a stand that you can walk to the top of to take in the entire market scene. If you look off to the left you will see the world’s tallest Christmas Pyramid (14 meters tall). This is easily the biggest Christmas Market I’ve ever been too and contained such a variety of goodies from food and drink to Christmas pyramids, nutcrackers, and jewelry. There was also quite a few rides for the kids, with a Ferris wheel (which I highly recommend- such a fun way to see above the market and it was fast), two level carousel and train ride (there was more than that, but those are the one’s our boys rode). It was…incredible. The Christmas Market of all Christmas Markets and definitely earned it’s “largest and most popular” title.

Christmas Market on the Neumarkt

This was the second market we stopped at and it’s actually an Advent Market. It is located at the base of the Church of Our Lady and is a fairly spread out market (it’s not like the typical rows, rather a wider pattern). It seems a bit small (especially after going to The Striezelmarkt), but it has a unique little market charm. It has a quaint older carousel and quite a few of the handcrafted booths. One of the things that I loved about the smaller markets is the more handcrafted booths. With the rest of the markets (exception being Augustusmarkt), there are a lot more of the smaller businesses with homemade items and less of the big business stalls. 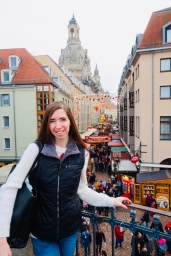 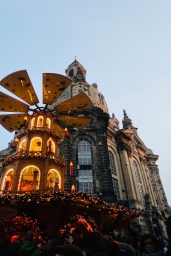 This was a hectic market. This particular market takes place on the street following from the Neumarkt square. It’s a somewhat narrower street, and definitely more crowded with people. It begins just below the Frauenkirche and ends at the terrace overlooking the river and bridge (it stretches along Bruhlsche Gasse). It features around 45 stalls selling pottery, glassware, food and drink, and other regional specialties. This is a nice compact spot to wander through on your way through the various markets. 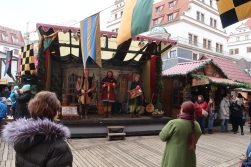 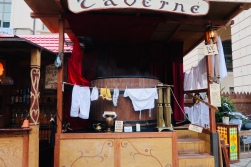 This was one of my favorites within Dresden. This is a medieval market and truly lives up to that name from everything from your entrance tickets (cut to two by a costumed character with a spike or executioners’ blade), to the stalls, to the performers on the stage- it all is straight out of the medieval times. The culinary treats are not only German, but from various parts of Europe (including Russia!) and the wares up for sale are all handcrafted and relating to the time period. Handmade mugs, iron pieces, jewelry, leather bags, you name it, they probably made it. It also features a tub that you and some of your friends can enjoy a little wash in if you so desire, performances throughout the day, and an arrow contest for the little ones. There is a cost to this market, but I found it to be a reasonable price and it was a market I won’t be forgetting any time soon. 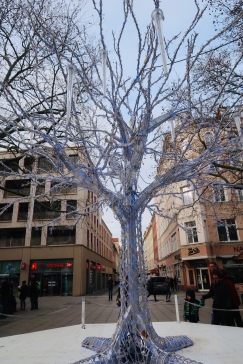 This is a newer, modern market that is located in the “New Town” of Dresden. Each stall is adorned with white tents and golden tinsel, with various decorations in the middle of each section of stalls. I will say- it seemed like this market was heavily food and drink featured, with other stalls containing mostly mass-market items. There were a few unique stalls, but I wasn’t super impressed with this market. It does have a historic Ferris wheel and a carousel at the outset (on the Horsemen side), but otherwise this market was a hectic collection of food and drink with a few stalls in between.

While walking we wandered through several other smaller markets that I didn’t fully catch the names of (sorry!), but just added to the magical air. That is the beauty of going to a city like Dresden, a city that goes all out for Christmas, you can just wander around and you’ll find little markets here and there. There is something very special about seeing a city pull out all the stops during this festive season. Even if there wasn’t a market, there seemed to be Christmas Tree’s, Holiday Decorations, and a certain cheer everywhere we looked.

We didn’t actually really buy much of anything this past weekend of markets (surprise!). I picked up one present for a friend and then just the mugs for the drinks, of which I got 4 total. HOWEVER, we did eat…and we ate well. We picked up bratwurst sandwiches, donuts, hot cocoa with rum, Verpoorten, and glühwein. Everywhere we looked there was something new and delicious to try and it was all somewhat different. This was one of the few cities where the markets offered more than just the sandwiches, crepes and trdelniks- we saw people eating soups, salads, and other full meals.

Honestly, I loved Dresden. It’s my second favorite set of markets that we attended this year (the blog post on my top is coming!) and I just felt like everything was incredible. I mean it helped that I loved the city of Dresden too, but the markets were well worth the hype. They are definitely bigger and busier (so plan accordingly), but highly worth it. You can easily do several in a day, although I would definitely recommend two days if you are wanting to hit more than two or three of them. In one day, you can definitely hit Striezelmarkt, Neumarkt, Frauenkirche, and Stallhof. The only market that we didn’t make it to, but debated on quite a bit, was the Winter Lights Market on Prager Strasse.

Have you been to Dresden’s Christmas Markets? What were your thoughts?