The weekend before Christmas we spent a very magical 24 hours in Dresden exploring Christmas Markets and landmarks alike. You can see my post on the Christmas Markets HERE, but today I am going to talk about some of the sights and my favorites about Dresden.

Dresden is the state capital of Saxony and it is the 12th most populated city in Germany, the second largest city on the River Elbe. The city itself is relatively “recent” in comparison to the history of Germany, dating to around the 12th century. It has served as the seat of the state since it’s settlement and has also always been a center of culture, education, and politics in Germany. The most incredible thing about Dresden is that the entire city center was destroyed, along with 25,000 people killed, during the bombing of the city by Americans and British towards the end of World War 2. Certain parts of the inner city were completely reconstructed after the war including the Zwinger (the royal castle/palace).

I will be completely honest- a lot of my time in Dresden was taken up by either Christmas Markets or in awe of the architecture and landscape of the city itself. I’m looking back through my pictures and thinking “oh I loved that spot” and “that was pretty cool”, but not remember a lot of the details about the trip itself. Partially my fault for waiting this long to actually write this post (it’s now after New Year’s), but also Dresden was the second city that I really just let my “amateur photographer” heart fly free. I just took pictures (so many pictures) and wandered around. There wasn’t a lot of “specifics” to our trip. So, forgive me if this post is a little vague or different from previous posts. I’m still figuring out how to merge a couple different passions to put together the best posts that I can for you. 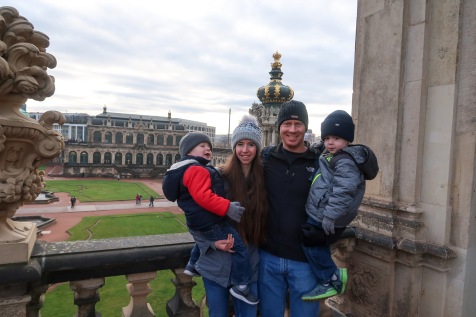 So, since this post has already derailed into something very different than I anticipated, I’m just going to continue that trend…

While in Dresden we went square hopping pretty much. Each square has a “focal point” of sorts, whether it’s a palace, a statue, or a church. Each square also had a Christmas market, so we would start at the Christmas Market and then walk in to whatever the nearby attractions are. In our minds we had two or three “must see’s” on our list, but otherwise we just wandered around.

The first square is the main square and right off the main square is the Church of the Cross. This is actually the main church and the seat of the Evangelical-Lutheran Church in Saxony. It is also the largest church building in the state. The church itself has been through quite the history, but its current state retains the look of the church post Dresden bombing. It was decided to keep it in that state, rather than refurbish it to prewar designs.

These were both absolutely incredible churches in full painted and designed glory. An interesting fact about Dresden (back in the day)- at the time the rulers were Catholic, BUT most of the residents were actually protestant. The Catholic Church of the Royal Court of Saxony is one of the foremost landmarks of Dresden. In fact, I can almost guarantee you’ve seen a picture of it, it’s incredible. The original church actually had a private high-level walkway from the Dresden Castle to the church for the rulers and other high-ranking officials to use. Of course, like much of Dresden, the bombing heavily damaged the church and it was fully restored following the reunification (including the private walkway between the castle and the church). The church does not only hold mass and services, but also (like many of the churches in Dresden) concerts throughout the year. In a slightly different tone, the Church of Our Lady was left in ruins after the bombing of Dresden to serve as a war memorial (for 50 years!). Originally built as a way for Dresden citizens to assert their will (by remaining protestant in the 18th century), the church was not rebuilt until the 1990’s-the early 2000’s.

Something that we had on our list and did see was the Procession of Princes or Furstenzung. 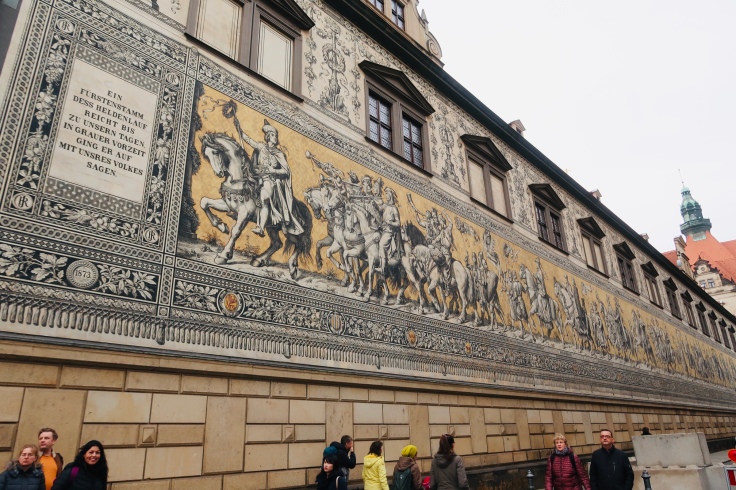 This is a 101-meter-long mural that shows the ruling family as a procession of various riders. It shows the Wettins’ family lineage through the years. Originally painted in the 19th century, it was replaced by porcelain tiles in the early (early- very early) 20th century due to the elements fading the paint. It is now known as the largest porcelain artwork in the world and is absolutely incredible to stand in front of. The members of the family are accompanied by various other “common folk”, scientists, children, and such.

We also managed to make a stop at The Zwinger, which was on our list.

The Zwinger has a long history, but I’ll be completely honest- I don’t quite understand it. So, I’m not going to try and talk about the things that I don’t know about it (as that would be wrong), but my basic understanding was that Augustus the Strong (who was recently made King of Poland and Elector of Saxony) wanted to have something similar to Louis XIV’s Palace of Versailles. It ended up getting changed around several times, halted, and finally completed at a much smaller scale. It was destroyed during the bombing, but was fairly quickly rebuilt (in the grand scheme of the other buildings listing within this post). You can walk the main garden levels, and then up higher in the ramparts. Within the buildings are museums containing artwork, porcelain, and jewelry.

Honestly I would recommend just walking around Dresden.

Obviously going to the Zwinger, the museums, the Procession of Princes are all great places to start, but really I would recommend just walking around the city. The city (as many in Europe) is divided between “Old Town” and “New Town” by the river and it’s really neat to see both sides. By walking around you’ll see most of everything the city has to offer and then some. I would recommend separating your time by Old Town and New Town (whether you’re doing an overnight or day trip). If you are only going for a single day, I would stay with Old Town.

As for Parking, there are several parking lots within the city, both indoor and outdoor, with reasonable pricing. I would honestly go a bit further to go to one of the outdoor lots as people often times won’t go a little bit further, so there is a higher chance of them having open spots. Once you find a spot, I would just stick with it (some lots have the 24hr tickets) unless where you are staying is across town or you have a large amount of luggage. There is a large Galleria/Mall parking garage, however this is one of the first places that will fill up during the busy/Christmas season, so keep that in mind.

Depending on your travel plans (where you’re coming from, where you’re going, what you want to do), I don’t think that you realistically need more than the 24 hours to really get a good idea of the city. I felt like we got to see everything we wanted to and then some during our time there. You can definitely make it a longer trip, but I didn’t feel like it was super necessary to do so.

Overall we had a lot of fun on our little overnight get away and I really loved Dresden. It has elements similar to Prague, so if you loved Prague, you will probably love Dresden.

2 thoughts on “Dresden – An Overnight Trip”