This week we are talking all things Bingeworthy, from television to books, everything that you will quickly be sucked into and want to keep watching or reading until the very end. Today we are talking about some of the popular shows that are not only binge-able, but very enjoyable and a great method of escapism. To be honest, most of these are already either watched, being watched, or on everybody’s radar. I’m listing them in the random chance that maybe you are the one person who hasn’t seen them, or are on the fence of watching them. I’m going to break this up into categories and try to keep it to three shows per category with an honorable mention section if I have any others. 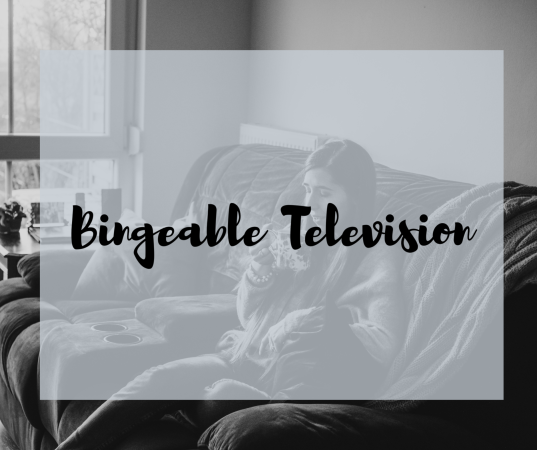 So, I’m a bit of a reality TV junkie. I consider it my one true guilty pleasure and it’s something I’ve been majorly missing since moving to Germany. (Let’s face it, the Real Housewives hits everyone’s radar at some point). Thankfully, Netflix has really upped its television game going from only doing docu series (which I LOVE), but also television, movies, and, most importantly, reality TV.

If you haven’t seen this show then I don’t really know where you’ve been. I kid. Honestly though, this show has it all- romance, not romance, surprise, drama, and a will they or won’t they premise that will surprise you till the end. It is also one of those shows that you can talk about for a long time afterwards (so when you’re finished message me ha-ha) and is compulsively watchable (I watched this in one day…).

Another show that, if you’ve never heard of it then you must not be living in the online world (although I think that they’ve even talked about this in the print papers too). This one is a bit more serious than Love is Blind and is a bit more…unbelievable. It’s basically every single outrageous thing that you could think of in one show, plus big cats. Another show that you will binge (I watched it in one day…it was a very unproductive week the week I watched all of these…) and then want to obsessively talk about with everyone you know.

This is one that my husband and I have been watching during dinner the past week or so and it’s just so…feel good. It takes a premise of statistically analyzing our social society. It covers everything from gender questions (are women better multitaskers, who talks more, etc.), to age questions (what age you are the prime at, brain function across ages), to dance battles (that literally had me crying I was laughing so hard). It’s just a fun, interesting show that will lead to all sorts of fun post show conversations.

I have a couple of “extra shows” that I think would be fun to throw in the mix for this category. The Circle is an interesting look at social media and how being popular and having the influence control plays out in a smaller setting. Not only is this fun to watch (think Big Brother fun), but it’s quite an interesting look at how life plays out online. 3 Wives 1 Husband is a mini-series (4 episodes) about a community that lives a polygamous lifestyle. I feel like this is a better, more realistic, representation of what polygamy actually looks like (instead of Sister Wives) and they do a better job of explaining the concept. It’s definitely an easy watch, although you may find yourself asking the “what” question quite a bit throughout.

Now, when the Reality TV has gotten to be too much, let’s look at “Sitcom” shows…

This is a Netflix show that has just the right amounts of drama and comedy. It’s a premise that I haven’t seen before (at least in such an open manner) and one that I think could only be done in the UK. The nice thing about Sex Education is that while it is bingeable, it doesn’t have to be. It is just as nice to savor it as an episode or two at a time. No matter how you watch it, this show is definitely worth the watch.

Ok, this is probably the best of sitcom right now (probably not, but this is just classic Sitcom, so I have to mention it). The perfect comedic relief right now, this show will have you doubled over in stitches, while also really caring about what happens to the characters.

An “oldie” but a goodie, Big Bang is a show that just doesn’t get old. We turn this one whenever we want something that is just light humor and feel good television. And honestly, we just looked and were surprised by just how far we are into the show. We only have a couple of seasons left in our re watch.

Only one honorable mention, The Ranch. This is another funny, feel good, current commentary show to watch. The best bet is that it’s over so you can binge start to finish without waiting for any new episodes. It’s equal parts comedy, romance, and current day commentary. Would highly recommend giving it a watch. One other show that everyone knows about, but is worth all the hype, is, of course, Friends. However, Netflix pulled it and now I’m stuck without it for a bit.

I am incredibly biased here, but I LOVE Outlander. Yes, it’s cheesy at times. Yes, it can be heavy on the romance and sex at times. Yes, it’s not always the most accurate in terms of language/mannerisms (history wise it’s pretty spot on). But it’s still SOOO good. It’s definitely a bingeable option and quite a few of the seasons are available on Netflix, so easy access. I’m thinking of going back through and doing a re watch of the available episodes.

Again, biased as I’m a huge Holmes fan, and I’m going to be a bit extra and include two adaptations in this recommendation. The first is Sherlock with Benedict Cumberbatch playing our leading man. This version only drops a few episodes at a time, but they are so spot on to what I would imagine from Sherlock and Watson is the perfect amount of annoyed and subdued. The second recommendation is Elementary which has a female Watson and I am OBSESSED with it. It’s not quite Sherlock as I pictured and yet it is perfect.

A Discovery of Witches

This might be one of the shows that isn’t on Netflix, but you can find it on other online platforms (Sundance & Shutter both have it available to stream or it’s up for purchase). I absolutely loved this show, and the books that it was based off of. It’s a bit of a slow start, but highly worth it till the end. If you like the show, but wanted more, then check out the books!

A couple more that I want to mention in this category that I am going to be doing a re watch of and will just put on when I am not sure what else to watch. Suits, which I’m sure you’ve heard of by now, is a good bingeable watch that is full of courtroom/legal office drama. The entire series is out so you can watch from start to finish and fall right into the drama of everything that is corporate law office (not really, but we can pretend). Gilmore Girls is a top-notch family drama (almost Sitcom though) show that just gives you the feel goods with just enough everyday drama that makes it all come together. It’s not high drama like the rest of the shows, but it’s one of my top shows.

I figured I would give a little list of the shows that are on my radar to watch in case you were wondering what was up next.

You (still haven’t watched this <facepalm>)

And that is it for my Bingeable TV Shows! What is a show that you’ve been loving lately? Watched any of my recommendations? Leave your thoughts down below 🙂