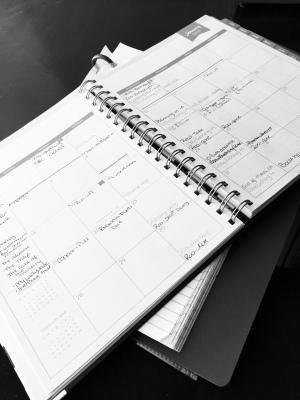 So, January 2018 has come to an end. How was the first month for you? How is the year starting? If you made any resolutions have you stuck with them or have they already gone out the window?

If January was good to you- great! Now you’ve got to keep that momentum going. February is a hard month, but if you can channel all that momentum you had going at the beginning of January, you can power straight through February and right into March. Remember how you felt each time or day that you accomplished your goal and hold on to that feeling when you want to skip a day or slack off on whatever it is that you want to accomplish this year.

If January was not so good – that’s ok! February is a new month and a fresh start. Put everything that was bad (or not so good) about January behind you. Don’t hold onto that negative as you head into a new month. Set a new or revised intention to start February and work towards that. Just because January was not the best DOES NOT mean that 2018 is doomed or that you need to hold on to it. Start fresh.

For me, January was a good month. Definitely not the best month I’ve ever had, but it was a really good and positive moth. I said at the start of the year that I don’t set resolutions, however my intention has been going alright. I have been avoiding speaking negatively about people (although I have slipped up a time or two being honest) and I’ve already accomplished so so much. I’m really positive that 2018 is going to a really good year all around.

For February I am looking forward to not only continuing with what I’ve been accomplishing, but expanding my intentions to include some more bits with A Cuppa Cosy. I am going to be taking some time to create a path and full vision for what I want A Cuppa Cosy to really be. I’m excited to share with you along the way!

{Photo Friday} The Pantheon was one of this experiences that I don’t know if I fully grasped at the time. I knew it was incredible, I knew it was breathtaking, but it wasn’t till I broke down it’s history that I truly grasped...well, its history.
It’s been a bit of a slow Thursday, so I’m throwing it back (in typical #tbt fashion) to this moment in Rome. It may look like a standard building, but inside was one of the most incredible churches I have ever sat foot in in my life. Continued proof that a) you can’t “judge a book by its cover” and b) you never know what is on the other side of that door. I am so glad we decided to stop in here on our walk through Rome.
It’s been rough. Just one of those days (hell one of those months), but at least we had this absolute beaut of a sunset to remind me that just like the sun sets on every day, this too shall come to an end. This sunset, a short short impromptu yoga session, a little book therapy (the reading kind not buying kind 😂), and a little music therapy was all that was needed to pull us all out of the funk of today (maybe of the month too?!).
The sweetest little boy and his sweet little post nap snuggles❤️
Sometimes all a girl needs is some colorful buildings, cobblestone streets, and a beautiful sunset. Karlova Vary has all of that and then some ☺️ Sadly though, I had none of that today, but it still wasn’t a bad start to our week. Thumbed through some pages of a book, did a little blog brainstorming, and did a little trip planning. Did you have a good Monday or a Monday Monday?
We went out to dinner with friends last night which ended with gelato for dessert. It was delicious and all...but I just don’t think anything will top eating gelato while walking the Italian streets. It just won’t. #sorrynotsorry