Here in Bavaria (a state within Germany) they are highly religious. Every holiday is celebrated with the appropriate parameters and one of those celebrations is Fasching, or Carnival. We experienced our first Fasching parade last year, but we were still so new that I didn’t feel comfortable talking about it much. Now, a year later I feel a bit more comfortable. I may not know all the ins and outs, but I feel a little bit more of a connection with the culture and having seen two very different parades, feel like chatting about it. This will be similar to my “Bavarian Weekend” post, in which I talk about some of the traditions of the region that we live in.

Fasching is also known as Carnival or Fastungnacht and refers to the time leading up to Lent. In much of Germany carnival season actually starts around Epiphany (January 6, also known as Three Kings Day) and continues through to the Tuesday before Ash Wednesday. Most parades and parties occur in February, with many being the weekend right before Ash Wednesday. Overall though, the days of carnival signify a party; a last shebang if you will before the seriousness of Lent.

Carnival occurs across Germany, as well as Switzerland, Italy, some areas of Austria, Luxembourg, Lichtenstein, but other countries have also adapted Carnival to their own traditions such as Latin America, and even New Orleans’ “Mardi Gras”. It didn’t really pick up much steam in regard to the United Kingdom or United States of America due to the history of Henry VIII moving away from the church and such. The history of Carnival (or of this style of celebration) can be traced back quite a ways, but the oldest mention is somewhere in the 13th century.

Basically, it is a chance to party and enjoy life, before repenting all the sins and it is very much enjoyed by all.

Last year we attended a small-town Fasching Parade which consisted mostly of very small floats being pulled by small tractors or by hand. All of the floats usually had some parody of local and international politics. All of the floats (whether about politics or not) all reflected what was trending in the world at the time of the parade or within the last year. For example, there was a cart referencing the Border Wall from last year. When attending a Fasching Parade or Event (they have balls and other parties as well), it is expected that you dress up. For the parade it is a chance to dress up in a costume of your favorite character and there is candy tossed for the kids, shots of alcohol for the adults.

So, last year’s small-town parade was a really nice introduction to the concept of carnival. 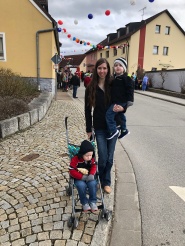 The kids got to experience the parade, load up on candy, and it wasn’t a “big production”. This year we went to a slightly bigger town (that is in fact closer to our house) and got a much bigger taste of what Fasching can actually be. We had so much fun getting swept away by the excitement of the crowd, the party atmosphere, and just the general feeling of “fun” that the Germans have when it comes to life.

At this year’s parade, we saw floats about Star Wars, Frozen, Vikings, Snow White, Coronavirus, and so much more. We collected an incredibly large amount of candy (that my kids will definitely take a year to eat), and I even got to have a shot. 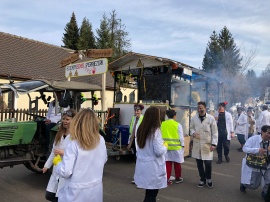 The entire afternoon was set up as one big celebration and we definitely got a little swept away in the atmosphere. This year’s parade was exactly what we want when we look for these celebrations- not too small, but also not too big. There are much larger, much more well-known parades and parties that we could attend, but I like the small-town community feel of our neighboring larger towns. This is how I would recommend celebrating the Fasching or Carnival period. I say that, but I may have a larger plan for next year to attend one of the bigger ones in our area (bigger than this year), in order to experience what the larger one is like.

I don’t know if this post really went a direction that I intended it to, but I hope that you enjoyed learning a little bit more about Fasching and getting a little glimpse into some of the celebrations that we experience living here.