We spent a total of 2 ½ days in Normandy (including our to “travel days” to and from as we did things on those days). You’ll have seen my post devoted to Mont-Saint-Michel already (if not it’s HERE), but we did so much more in Normandy than that. Normandy has played such a role in World History being a landing site and the beginning of the Allied Forces taking charge during World War 2, however before that it was just…an area of France. The beaches that were stormed were just beaches and the area is absolutely gorgeous. During our time in Normandy, save for the Mont-Saint-Michel reprieve, we focused very heavily on World War 2 history. My husband had a long list of places that he wanted to see, and we managed to see most of them. Not only that, but our children were able to learn and understand what happened during that war, but I’ll get into that a bit later.

After checking in to our hotel (we stayed at an Ibis in Port-en-Bessin-Huppain which I would recommend), we decided to just hit the ground running and head off to our first spot. It only felt right to pay homage and respect to those who gave the ultimate sacrifice before anything else, so we started at the American Military Cemetery at Omaha Beach. 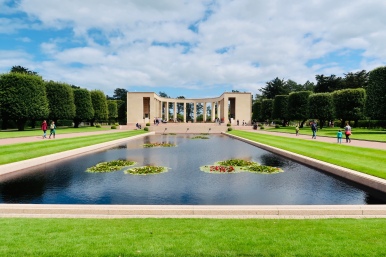 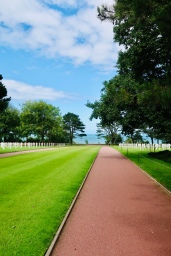 The cemetery was originally a temporary American cemetery established in June 1944 and was the first American Cemetery on European Soil in the war. The cemetery has 9,385 graves, most of those who perished in the D-Day Landings and following operations, as well as a Walls of the Missing monument that contains 1,557 names. There is a visitor center within the cemetery, although this was closed due to Covid and there was also a path from the cemetery to the beach, but that closed due to security a few years back. You are able to walk the entire cemetery, through several different pathways (should you choose to walk along the beach side, the center, or the roadside), the wall of the missing, and the monument that details out the landings and invasion.

From the cemetery we went over to Point du Hoc. We wanted to make sure we were able to walk the area before it closed (as the locations with centers have opening and closing times, the beaches do not-you can walk those at any time), so we passed walking the beach until after. Pointe du Hoc is a little west of the center of Omaha Beach and a Ranger battalion was tasked with attacking and capturing the fortifications. Pointe du Hoc is a wall. A rock wall.

The Germans had a completed 4 casemates that housed guns, an observation bunker, and anti-aircraft guns.  The plan was to land by sea, scale the cliff and capture the area. There were quite a few problems that arose during the attack, a timing setback, the ladders weren’t long enough, and the second wave of soldiers did not get the flares in time and wound up landing on the beach rather than scaling the cliff. Now you are able to walk amongst the paths of the original fortifications and see the various gun mounts, observation deck, and bomb craters from World War 2. The site starts with a large plaque detailing what happened, and pointing out information before you start walking through the path. It ends at the monument to the battle.

We went to two beaches while we were in Normandy, Omaha and Utah Beach. I’m not going to go into all the history of what happened at the beaches as we should all have a basic understanding of D-Day and, quite honestly, there is so much information about the pre landings, landings, and ongoing battles afterward that it would be too much for this one post. However, I will do a brief rundown as to what we saw at each and a little comparison.

We went to Omaha Beach first.

Omaha Beach is probably the most “well known” of the beaches, the one that is featured in a lot of the films/movies, and the one that is talked about frequently. At Omaha Beach you are able to see the remains of the temporary harbor that was built after landing during low tide, as well as the memorial. The memorial is located at the center of the beach and features three independent sections. It was an incredible bit of time walking the same steps that a soldier might have taken.

Utah Beach was our second beach, visited on our second day, and it was another incredible experience. 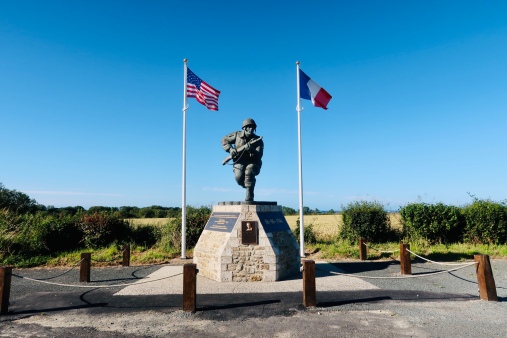 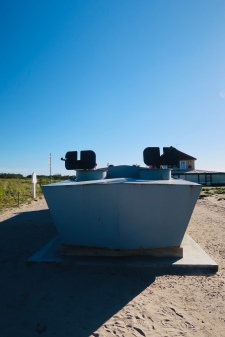 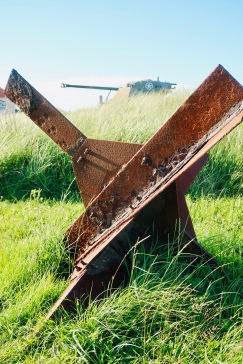 Utah Beach was different from Omaha in that there was a lot more artifacts to explore. Utah Beach had one of the Huey Boats, had the anti-tank obstacles, had some tanks, and the museum also has airplanes and other items from D-Day. Our boys were able to have a much better understanding of what happened as they were able to see and visualize what it looked like.  It was something special to, once again stand there, but then see and wander through the various areas that…really haven’t changed in these 76 years.

After leaving Mont-Saint-Michel Abbey on our second day in the region, we headed over to the Airborne Museum in Sainte-Mere-Eglise. Sainte-Mere-Eglise is one of the well-known towns from the various battles in France during World War 2. The town was under German control and the airborne paratroopers were to drop in the town during the night. What led was one of many firefights to liberate the French town. Over 3 days the Americans managed to maintain control of the bridges through the town, liberate, and continue to move forward. Sainte-Mere-Eglise is one of the French towns that continues to hold the American Military and the night of liberation in the highest esteem. The town is milestone 0 of The Freedom Path which is the path taken by Patton’s 3rd Army from Sainte-Mere-Eglise to Bastogne.

The Airborne Museum was born out of a desire to continue the memories of those who gave all and of that night that the town was liberated, and all of World War 2. This was one of those museums that you just have to visit. Beyond the typical artifacts and such that were used in the war (which were incredible) the museum has debuted an interactive iPad experience. They also offer a simulated jump experience that replicates what it would have been like to jump during World War 2 as well as what the ensuing battle would have been like. Excellent for both kids and adults as it’s a bit tamer than some of the other WW2 museums we went to (like Bastogne…but that’s another post).

The final place we went to on our final morning in Normandy was Longues-sur-Mer battery. 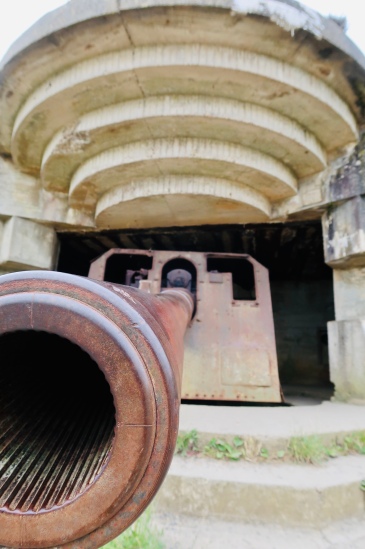 This is a World War 2 German artillery battery that is still relatively intact. On another cliffside, this battery is between Omaha and Gold Beaches. This is the ONLY battery in Normandy to retain all the original guns in their original positions. Walking the path, you are able to see the 4 casemates and the observation tower all fully intact, as well as walk through the guns in the casemates. I don’t think we could have picked a better spot to end our time in Normandy as this was just…incredible. To see the guns in the places they would have been, the cliffside as it was, the debris in the water, the view from the observation tower…there are no words. 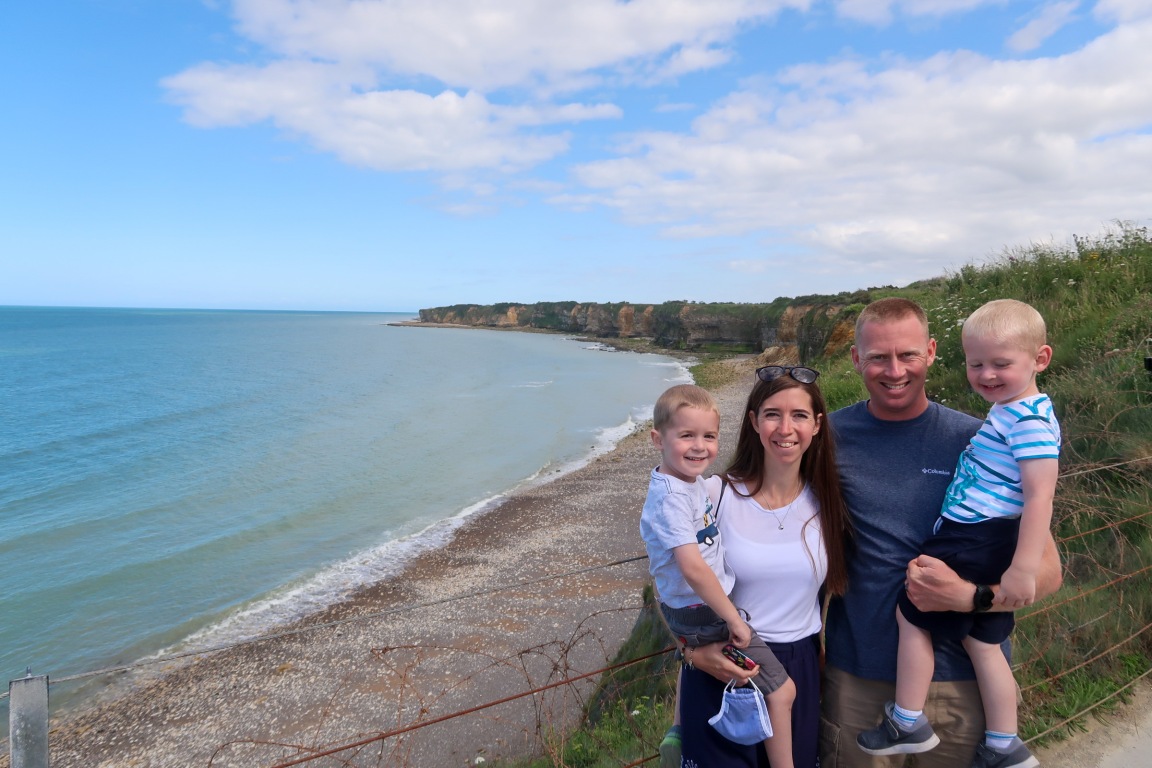 And on that note, we drove out of Normandy and over to Belgium.