Good afternoon everyone! I hope that you are doing well and that you had a great weekend! I posted quickly on Friday about a new feature that I am going to start trying out and this is the first post! Just to quickly say, in case you missed the last post, I am going to start trying to do a weekly post of photos of my week. These posts will be going up on Mondays and would be the previous week. I don’t know how often these posts will be, I am hoping for semi weekly to weekly, but it will vary in length depending on what the week entailed. Since this is the first post, I am also going to detail a little bit more about what my weeks look like in a day to day sense.

**I will say right now, this could become a long post, so it may be a good idea to grab a cup of something wonderful or a quick snack. For myself I grabbed a large cup of tea and some little chocolate pieces as I am writing this. It will help with a curled up mindset, I promise! 🙂

My week started on Sunday and for me, Sunday’s are writing, reading, and relaxing days. I try to get my grocery shopping done as early in the day as possible, so that I have the rest of the day to just relax and most around the house. I work on the weeks blog posts and then get a substantial amount of reading done.

Monday through Fridays follow the same day to day routine with work, business, and little human. I work part time (about 4-5 hours a day) with a couple hours in the morning and a couple in the afternoon. In between, I take a lunch break and play with little human.

Where the fun begins is the weekends. This past weekend was an exceptionally fun one as we went on a little 2.5 day vacation.

We celebrated our anniversary

in the middle of the week and while we weren’t able to do much on our actual anniversary, we decided to celebrate over the weekend by heading to Hershey, Pennsylvania! Dubbed “The Sweetest Place on Earth”, it really is in food, people, and things to do! I have included, probably, way too many photos below about all of the different things that we were able to do.

We started our first night off by checking into our hotel and then heading over to Hershey’s Pantry. This was a small little restaurant with decent food. Rob decided to be adventurous and order a Chocolate Coke and really enjoyed it! I wasn’t as big of a fan of the drink, but it was horrible. We picked up a couple brochures to decide what we were going to do the next day.

We woke up bright and early after a rough night-who would have though little human, who has done so well at other places, would decide not to sleep by himself in a hotel room?! It was an off and on night of sleep, but we didn’t want that to deter us from enjoying everything that we could. With both of us being history lovers, we decided to start at the National Civil War Museum. I think The Civil War (along with WW2) is one of my husbands favorite times to study and learn about. This museum was incredible with it’s mannequin diorama’s and historical objects. It really gave a new life to such a trying time in our country. 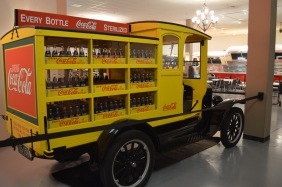 We also decided to make a quick stop into the Antique Automobile Club of America Museum. They had a nice selection of old carriages and cars and a large history of how cars became to be what they are today. Growing up around older cars and motorcycles I did really enjoy seeing some of the cars and the history!

After a stop back at the hotel for lunch and little humans nap, we headed out once again.

We headed over to Hershey’s Chocolate World, which I’ll be honest was cram packed with people. Strollers are not allowed inside the little shopping/museum/“factory” area and I completely agree with that policy. You could not move very far without either running into someone, or running into merchandise.

That being said, it was so much fun! We went on a little ride that took you through the process of making the chocolate and chocolate bars and explained what made Hershey different from other brands. We wandered through loads and loads of different chocolate items that Hershey makes and all of the different varieties for each specific candy bar. It was mouthwatering to be completely honest. 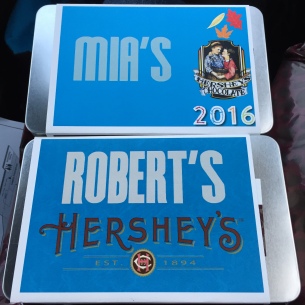 Our final stop in the Chocolate World was to make our very own candy bar! This was fun as you got to have your very own little bar made right in front of you in the same manner that all of the rest are produced. I chose to have a Dark Chocolate shell with rice crispies, chocolate cookies chunks, a Milk Chocolate covering (that was the only option for covering) and sprinkles on top. Sort of a mash up of Krakel and Cookies ’n Cream, with Dark Chocolate. I haven’t bit into it yet, but I’m sure it’s wonderful. 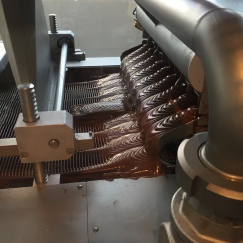 We stopped at Fenricci’s for dinner and had a lovely evening on the patio with some of the warming lamps. It was such a nice romantic evening and the perfect ending to the day.

We were scheduled to leave on Sunday, and after another restless night of sleep, we started to pack up our bags. The last thing that we wanted to do was take a look at the Hershey Story Museum. This details out Milton Hershey’s life, his development of his caramel company and later Hershey Chocolate, as well as the lasting impression he has made on Hershey, PA. It was a really neat museum with some interactive portions to allow you to get another look at the chocolate process. 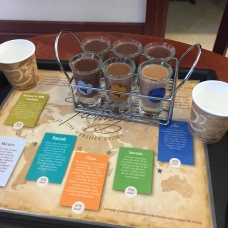 Overall, it was a really good trip and an alright week! I definitely needed the little vacation that we took as it was nice to be able to get out of our home, our routine, and not have to worry about much of anything! It got my mind off of everything that is and has been going on and it allowed me to put a smile on my face!

I hope that you enjoyed this post, although I know it got a little (very) long. I’ve been trying to determine what will be the best way to share these types of things with you. So any and all feedback would be great! Until Next Time…