We have had another one of those weekends recently where we’ve done a couple different things, each important, but not enough to warrant individual blog posts (although this one is probably pushing it). I figured I would once again, consolidate into one “long weekend” post. This is a bit longer than I would have liked, so grab a cuppa something good and snuggle in for a read.

The second weekend in October we got the chance to have a long weekend together. My husband had both Friday and Monday off of work (due to Columbus Day), but we didn’t really want to do a lot of traveling. Look, traveling is tiring and at some point you’ve got to take a little rest. I’ve mentioned this previously and have a full blog post coming up talking about it, but we decided that it was really in all of our best interests to stay close to home. We had actually originally planned a relaxing weekend, curling up at home, handling some things and just chilling.

Apparently the weather decided differently for us.

When Sunday morning hit and we were supposed to see 70 degree’s, sunshine, and not a cloud in site we made a last-minute decision to take a little trip to the Nuremberg Zoo. I’ve been wanting to go as the kids love the zoo and it’s an excellent learning opportunity for them. We also love seeing the wide variety of animals, as well as the workout that comes with walking an entire zoo with two toddlers who like to be carried off and on. We booked train tickets as that is a feasible option, a shorter train ride (about an hour for us) works best with the boys and no parking/navigation worries. The zoo itself is quite large (we saw everything there was to see and ended up walking about 6 miles), with a spacious layout. I do tend to worry sometimes about zoo’s, but I found the animals to be well cared for and have more than enough room/things to do. For the most part they were quite active, which pleased the boys to no end.

We did end up stopping for lunch within the zoo and found several things. I want to interject to say that this is the first time that we’ve eaten at a European Zoo (this is only the second we’ve been to; Berlin was the first) and I was incredibly impressed to say the least. Here’s the thing, you can order “normal” food. There isn’t pizza and hotdogs, we got Schnitzel Sandwiches and Chicken Cordon Blue. The food was served on proper plates and if you wanted to order a coffee or beer? Well you could and it would be served with the proper coffee cup and beer glass. Everywhere you could sit was clean and well maintained and people bussed their own tables when they were done. There wasn’t any trash overflowing, no massive gathering or anything. It was really refreshing and honestly, we would probably take a trip back to this zoo (it’s the closest to us) and spend another day here. 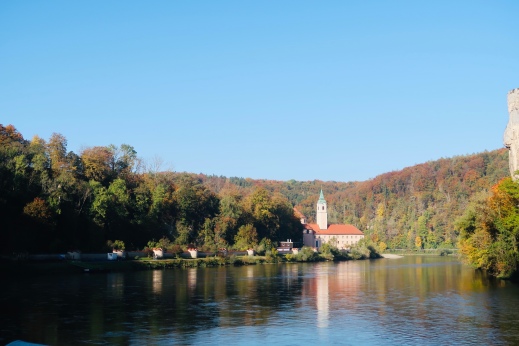 Monday morning, we did the one thing that we had planned for all along, a river “cruise” down the Donau River to Weltenburg Abbey. This was something that we’ve been wanting to do for a while, but we’ve been waiting for the weather to cool and the leaves to turn before doing it. And boy, we picked the PERFECT time to do it. The leaves were at the height of the coloring, right before they all truly start to fall off and in this area there is just enough of the year-round green to make the reds/oranges/yellows to really pop.

So, a little history first. Weltenburg Abbey was founded in 600 by two monks and is the oldest monastic settlement in Bavaria. The church was originally built in the early 1700’s but went through a period of being disbanded. King Ludwig reestablished the monastery and the abbey has been in use sine 1913. One of the neat things about this Abbey is that it has a brewery as well, Weltenburger Klosterbrauerei. It is one of the oldest monastic breweries, citing 1050 as the opening/starting date. It’s Dunkel beer has won several awards for being the best in the world, and there is a restaurant right in the Abbey courtyard where you can eat and drink the local dishes. 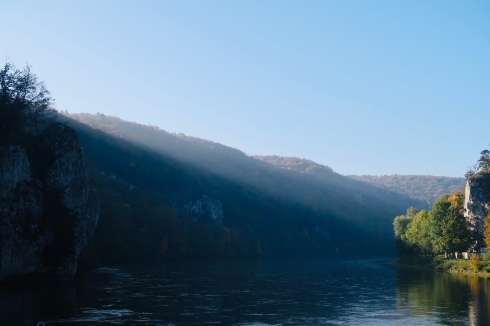 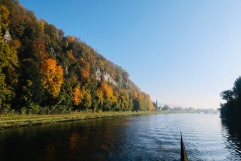 We took the first available cruise time, 9:30 AM. This provided us not only a relatively empty boat (seriously the second boat ride we saw come through was packed), but it afforded us the chance to see the sun peak over the hills and see the river under the soft dawn light (even though it was hours after daybreak). It was absolutely gorgeous. There are several sights to see throughout the cruise, as they talk about the history of the area. This area has ties to Napoleon and his reign, including a story about his suitcase being left behind. There are also quite a few folk lore style tales about river witches turning pretty maidens to stone, and three rock brothers fighting, then falling into the river. It is so much fun to hear about all the folklore and tales of the region and we really enjoyed that aspect. Plus, the fact that the area is gorgeous and the trip down the river was a nice smooth 40-minute boat ride.

Once we arrived at the abbey we headed in to see the museum, which contains relics from the abbey as well as a little kid’s room with hands on activities. You do have to pay for both the cruise down to the abbey and entrance to the little museum. The museum is entirely in Germany, although the very nice greeter told us you can request the movie to be played in English and they will try to accommodate. From there we headed into the church, which was easily one of the most gorgeous churches we have ever been in. It was absolutely incredible, both in overall looks and the minute details. The whole region that encompasses the abbey is able to be converted into one big hike and is absolutely gorgeous. We simply chose to hike up the smaller hill and get an overarching view into the abbey. 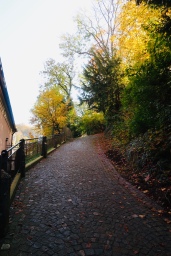 Since the abbey is still an active church, you are able to see the church being used by the monks at their prayer times.

We then settled in for a little bite to eat and a beer a piece. I went with a lighter beer and Robert chose the Dunkel. Both were delicious. It was a really pleasant atmosphere, sitting right in the courtyard, with the sun shining and the leaves gently blowing in the breeze. Shortly after lunch we took the ferry back to Kelheim. We had one more stop still to make on this beautiful Monday.

Our final stop of the weekend was to visit Liberation Hall. 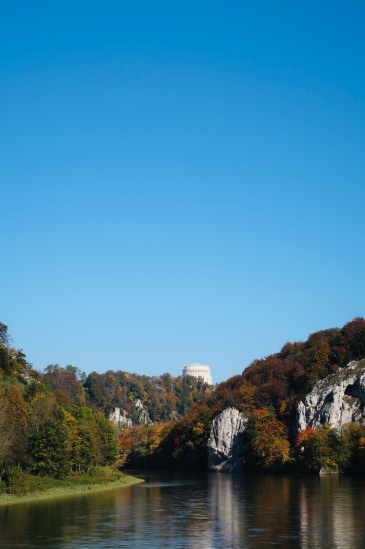 Liberation Hall was commission by King Ludwig as part of a “group” of several monuments. This particular one was intended as a memorial to victory against Napoleon. It is quite the masterpiece. On the exterior are 18 statues that are supposed to represent the various tribes of Germany (the number is also significant due to the date of the victory). The statues on the inside are the goddesses of victory holding hands for a ceremonial dance. Similarly, to Walhalla, you are able to walk around the exterior free of charge, but there is a cost to get inside. Unlike Walhalla, there is much more to the interior than meets the eyes. 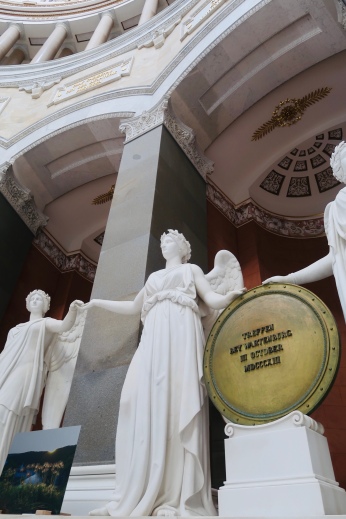 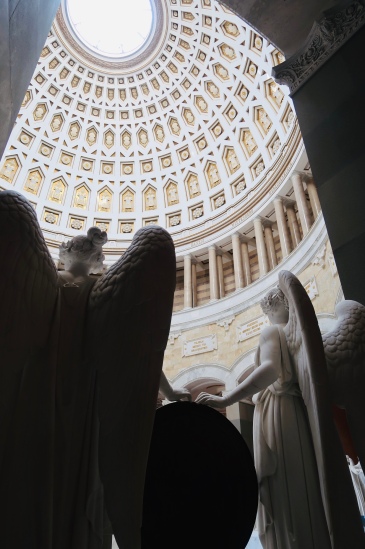 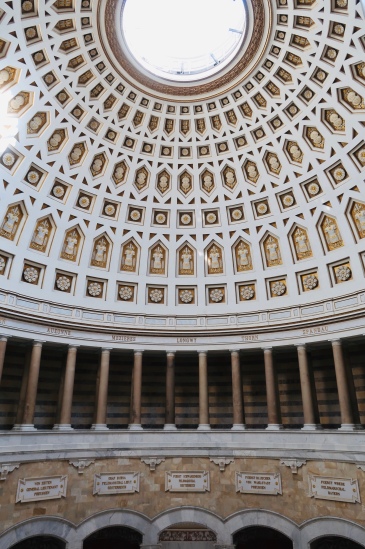 And that was our “close to home” weekend. Each of these places were well within a quick travel day (an hour or less) and are just beautiful spots. We would definitely re visit all three of these spots and I’d like to explore Kelheim a little more. I hope you enjoyed our weekend and seeing the sites through our eyes.

2 thoughts on “A Close to Home Autumnal Weekend”